Distinguished guests, friends from the media sector, ladies and gentlemen, Hello everyone, I’m Mile Nan, president of Global Max Media Group (GMMG). On behalf of the organizing committee of China-Africa International Film Festival and its organizer GMMG, I’d like to express my sincere thanks and warm welcome to all guests, in particular to distinguished leaders, journalist friends and cooperative partners from South Africa, thousands of miles away from China. 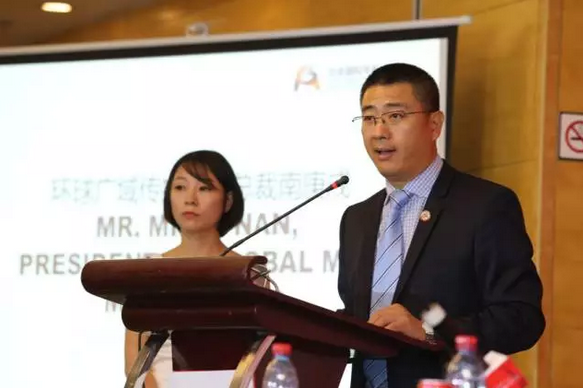 Under the background of the Belt and Road strategic concept, China-Africa International Film Festival aims at promoting cultural exchanges and cooperation, tied by the film, whereby to strengthen and enhance bilateral cooperation and to develop African film industry.

The first China-Africa International Film Festival is an excellent start. Films exchange and cultural exchange are internal communions with long-term and strategic characteristics.

Today, on behalf of the organizing committee of China-Africa International Film Festival I solemnly announce that the first China-Africa International Film Festival will be launched on October 12 to 22, 2017 in Cape Town, the legislative capital of South Africa. The Festival will be an annual event for China-Africa film cooperation and exchange, hence I am looking forward to see outstanding filmmakers from Africa and China to gather in the Bric nation and cheer for the opening of the Festival. As the organizer of this event, GMMG, together with South African partners, is to be in charge of all contractual services during the Festival. GMMG has become a leading ethnic Chinese media company with the most platforms, languages and coverage in Africa. Apart from traditional media, GMMG also engages in film industry. It is my great honor to take this opportunity to introduce one of our films shot in Africa——When Africa Meets Chanel.

Sino-Africa friendship needs inheriting and continuing, whereby film is the most effective and direct pattern for cultural interactions and exchanges. Cate and film are of importance to Sino-foreign cultural exchanges. In this regard, GMMG is racing ahead. A documentary film themed by “the nature of eating” in China and Africa will be online on mainstream television stations in South Africa soon. In the meantime, the China- Africa International Film Festival to be held in ZA is also a gluttonous feast of China-Africa cultural exchanges. Living in Africa for nearly 20 years, I have operated GMMG in exploiting media career for over 10 years. China is our motherland, and Africa is our second home. We are endowed with responsibility, confidence and determination to bear the task to open up a communication channel for Chinese and African film cultures, and we are ready to realize it. We will make films, exhibit them and broadcast them as well. There is a long way to go and a heavy burden to take as for China-Africa cultural exchanges. Nonetheless, we will make it! At last, thanks for all your supports, and we sincerely welcome you all to fulfil common development in Africa.

Many thanks to you!